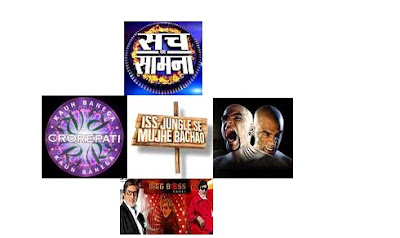 With Rakhi quetching about her make up on tv " dekho mera kya ho main kya thi kaisi ho gayi hun " and beau Elesh trying to coo and calm her down, we saw the beginning of another farcical and so called reality on tv. Another 2 - 3 months of exaggeration of every possible little " oohhs ouchs and haww's " and sponsers oozing their bundles of money for one promotional ad in between , love it or hate it but most of us cannot really live without this.

Little do people know from where this trend began.The first reality tv show was first aired in the 1950s. It featured a band leader and his family. The show actually started on the radio and was a husband and wife affair. The children were brought in and later, after it had transferred to tv, the kids grew up, got married and their wives were also in the show. It was called The Adventures of Ozzie and Harriet and had its roots in a spot on a radio show in 1935 and lasted 31 years until it ended its tv run in 1966. How things were featured then and now are no way comparative.

In India shows like ' Sach ka samna ' , ' Indian idol ' , ' Big Boss ' , ' Iss jungle se ..',' Splitsvilla ' , ' Roadies ' and so on ( list is unending ) keep playing with our emotions, we humanbeings are so vulnerable to our emotions that we let any amount of drama and madness in these shows play havoc on us. For example, NDTV Imagine had a big hit in Rakhi Ka Swayamvar (so much so that they're already planning the next in their Swayamvar series with the late Pramod Mahajan's son, Rahul Mahajan) where we were on hunt of who's going to be rakhi's bridegroom and now another hunt for those who want to make another match. These shows make the most of the emotional quotient of the viewers. These are the only alternatives to the melodramatic daily soaps. People believe the characters who are part of these are for real. As a result it becomes easy for the audiences to relate to the participants. To an extend the notion is true but the game is not about social service of showing real or plainly entertainment , its business of TRP's now, that can earn you crores that makes you popular instantly in between huge masses. If one chicken curry can make Shipla win Big Brother why cant anybody else use the same to have public sympathy? Every time when she cried the demand to see that episode increased vehemently. “Cry, shout, create scene and probably do everything you can to grab everyone's attention , that what makes you star" says Namita commenting on reality shows in a social networking site. Ratings of hyped-up reality shows have soared. The first episode of "Sach ka Saamna," for instance, got STAR its highest opening for a non-fiction show. Thirty million Indians tuned in.

"Reality shows always help push TRPs," said Programming Head, Sony TV, Gurdip Bhangoo. While COO, Zee TV, Nitin Vaidya said "Reality shows helps bring in new viewers." Fashion , glamour and real life , these shows are the perfect match for anybody's entertainment bon appetit infact they offer exactly what you want on your dish be it the superstar Amitabh Bacchan , Shah Rukh Khan or Salman Khan or be it hunting for the best singer or dancer or now be it hunt for your bride from lame public. They play with the mindset that people are always willing to see something different that could either be obscene ( entering into a couple's privacy ) or not so obscene.

Well not everyone hates it , you hunt and you will find several supporters of these shows while serials like Sach ka samna and Pati patni aur woh have got cases registered on them few others have escaped this narrowly, but people still love them. “The participants are willing adults who know what they are doing so who are the politicians to stop them?” asks Bangalore college student Nitin Jain, an ardent watcher of reality shows. Some of the Indian reality shows are adaptations of popular English shows aired on international channels. However while presenting it to the Indian audiences these have been thoroughly Indianised.

Indian audiences have certainly embraced global television trends. The Indian versions of hit shows such as "Who Wants to be a Millionaire" and "Big Brother" have turned out to be huge, multi-season hits.

Still, critics ask: Should television channels continue to air unregulated content to the remotest Indian villages? In many rural, single-television homes audiences are not so discerning as to vote with their remotes.Snippets from the grapevine reveal that gimmicks are used to capture an audience. It is believed certain scenes are staged and rehearsed and presented as 'reality' for the viewers after editing.

So, what is the reality behind these shows? This is a question that still remains unanswered...

Email ThisBlogThis!Share to TwitterShare to FacebookShare to Pinterest
Labels: my news article

First of all Reality Tv is not so real, if it would have been so real they need not to sell it by adding twist and turns
I think reality shows are introducing garbage in our living rooms and it is us only who are encouraging them to grow more and more in numbers. The day we learn to change the channel when such nonsense is coming then only televison media will stop making these absurd stuff and switch to something else which is more genuine

i agree but it goes that way peopel love anything thats different for them tomorrow if we see a donkey with two necks you would turn around wouldnt we? even if thats of no use or no sense ...its same with tv they are being served diff in name of reality tv so they see it , 2mwr something else will come up new they will see that ....

Thats true we got less option and zeal to consume new, referring to "donkey" it reminded of something that I think you should see (shot by me), probably it can raise TRP too , the children near my home came for Ganesh Chanda with a new way of fund raising, I promise you will laugh a lot
Link: http://img397.imageshack.us/img397/5839/ganeshchanda.jpg

haha ..was a good link, see i dint know about this donkey episode but seems i gave a good example :) guess people do like diff thinks and use them for diff reasons...