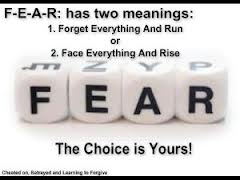 Human beings have a deep urge of knowing something. Our logical bend of mind is comfortable with whatever is known to it and uncomfortable with whatever is unknown. We feel pacified with the belief that whatever is known is rather always safe for us and unknown is always very unsafe because that keeps us in our comfort zone. Even though our own human mind is still quite unknown to us; we have learnt to find it safe based on the probability that it is largely behaving in a manner which is suitable to the harmony of masses. Even though some exceptional derelict minds have caused the world to go fear stricken like serial killers, fanatic leaders etc.

If you remember when you were a kid you must have been told stories of bad men and women , ghosts and monsters , big animals and humans or out of the world imaginary stuff to create fear in your hearts so that your mom could get you to either sleep early , eat quickly or stop you from doing something mischievous. Of course you did not know what they were exactly and what consequence would you land yourself unto so your logical mind induced into you the fear of unknown.

The amazing thing is even after we grow up we have never really overcome our fears we just swapped them with something else. Fear of ghosts or fear of water or fear of animals or fear of that sticky lizard on your wall was replaced with fear of examination or fear of public speaking or fear of revealing the truth or fear of future or fear of isolation, you name it and there would be somebody on this face of earth with that fear. So trust me you are not a loner in fear.

What is fear ? Basically an emotion that kicks-in in anticipation of a consequence waiting in future. The emotion kicks-in due to our deep seated beliefs in life Like
When your happiness is too dependent on the reaction of the world and their behavior, sometimes fear is from material objects and sometimes from our created ego eg the fear of being insulted or being misjudged etc.

Or when you start believing that nobody has failed ever and it is abnormal to fail or fear or when you are made to feel it is abnormal to fail.
Or when you are unable to trust that whatever the consequences in future all would turn out well and  thus unable to focus your attention on the task at the present.
Or when you are unable to accept that there are only little things that you can do with your conscious mind and for everything else your subconscious mind kicks in and dominates. The reason of our trying too much and inability to Let go off the results.

The reason for all the above beliefs is rooted in the idea that your destination can be reached through only one route, which means any hindrance in that route will instigate insecurity in reaching the destination and that is Fear.

Normally no man in this world is free from fear but it takes skillful management of the Monkey mind to control fear. Humans are the only beings capable of imagining their future consequences and thus controlling their mind would mean to give repeated training to the mind to imagine better consequences or at least results which are better than some worst case scenarios.
For example a student having fear of examination or fear of failure or fear of no admission can be trained to imagine results where he has performed better than average and secured admission in a decent college. Imagination of a believable consequence opens up the student’s mind to the various options which in turn acts as a sense of urgency to take steps to work on that consequence and also adds as a motivation. Most people mistake this as a state of day dreaming and shun it as their logical mind cannot see immediate results, but what they fail to see is that with every such anticipation of a better consequence the mind invariably starts selecting or doing things that enhances functioning of mind which in turn improves the future consequence. Thus winning over the fear completely.

Lets take another example a rather simple fear of spiders technically called “Arachnophobia” where you have a creepy feeling of having spiders crawling over you and hurting you. Though a sense of defense is quite natural for our body and is coded in our DNA but most often our mind plays tiny games with us because of some old recordings stored in our subconscious mind. This recording cannot be soothed down with any medicine, not that I am saying don’t have your meds if you need them all I am explaining is that such a phobia can be better addressed through a regular training of mind where the person can be introduced to imagine better consequences while a spider is around. Even if the person merely accepts the idea of doing this, the same mind which induces fear is forced to take a reverse gear and address the fear from a different viewpoint. The overcoming of fear would depend on the steps taken after that.

Here are a few things you can do to introduce yourself to take a reverse gear on your fear, whatever it is
a.     Slow breathing.
It is an immediate relief to any agitated mind. Count 10 to 1 is a proven and tested remedy.
b.    Next Imagine a good response for any event you dread for once stop being logical and try it. You can test it as game without worrying about how you are going to reach that state, like some video game simulate it to fit a situation.
c.     Get out and talk to people who have gone successfully through what you are going sharing experiences is a great way to remove fear.
You can choose to participate in a group that meets and shares. Or you can simply meet people who you think have grown over your fear and gain more confidence.
d.     Appreciate your efforts you take to counter the fear every trial is better than not trying at all.
e.     Focus on what you desire; the reason for why you want to overcome the fear and decide it is way too precious so you cannot lose to fear or give up at all.
Everyone needs a KICK after which their fear vanishes in air. Once you have done all the above steps you would need a strong reason which would act like your Boss and command your mind to banish the fear, for that you have to know what you want to be or to do once the fear is gone in short what is your strongest reason to fight that fear. That my friend is your Kick.
f.       Have something you can put your faith on , imagining that a higher power is always there to help you always helps. Call it God or Energy or whatever in words but believing that something good is helping you helps to tread past the fear easily.

Most people think that pushing someone to eliminate fears is the correct way of working on it. The fear of public speaking is a classic example of it. A person is pushed to his edge and embarrassed more in the process because he is asked to face his fear without properly initiating his mind to overcome it. Unfortunately fears are deep built inside it can be overcome only with stepwise encouragement and instilling confidence into your subconscious mind, knowing each individuals “Kick” then the fear gone will never return.